EFL Trophy – Future To Be Decided 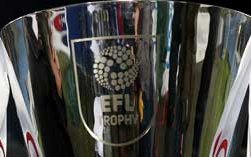 League One and League Two clubs will vote on the future of the EFL Trophy when they meet in May.

With Johnstone’s Paint ending their association at the end of last season, the Trophy format was played with creating a group stage and introducing Category A Academy clubs to the competition on a trial basis.

16 Premier League and Championship Under 23 sides came into the fray, but with clubs pulling out at the beginning and a very mixed reaction by clubs themselves and fans who boycotted games, member clubs will now be tasked in a vote whether to continue with Academy side involvement, revert back to the previous format or whether to scrap the competition entirely.

The stand out issue is undoubtedly the ‘spirit’ of the changes being honoured, as Academy clubs involved regularly turned to senior players and internationals when the whole idea was sold on being a competitive opportunity for Under 23 players to begin with – before, for what can only be PR angling, everything became known as Under 21 when it clearly wasn’t as Premier League and Championship sides no longer have Under 21 competitions, they are Under 23.

Add that to clubs being fined for playing so called ‘weaker teams’ when in fact all they did was largely comply with the ‘spirit’ of the competition by successfully fielding young players of their own, it’s certainly caused some angst amongst fans.

Whilst the Football League would point to Wycombe manager Gareth Ainsworth naming himself on the bench, the likes of Luton would point out their youngsters who made an impact – yet saw them fined.

At a meeting on Tuesday, EFL Chief Executive Shaun Harvey discussed concerns around the ‘full strength’ policy in play in the competition and if the Academy trial becomes the new format, clubs will want to see far more fairness in how they are treated on selections compared to how the invited sides were given latitude.

With Academy sides only having to play six Under 21 designated players, member clubs have to feature five players who started the previous game or go on to start the following game or who have made the most appearances during the season so far.

The proposal from the EFL is a relaxation of those rules down to four first team players, with goalkeepers not included and a change in the rules designating what a ‘first team player’ is.

The proposals would see the continuation of the current full strength criteria for ‘first team players’ but it would also now include players on loan from a Premier League or Category One academy or had 40 first team appearances to their name.

Other proposals are a further ‘significant’ increase in prize money, regionalisation until the quarter final stages and more flexibility in fixture dates to enable teams to schedule matches outside of international breaks.

‘We committed at the outset of this season’s competition to conduct a full and comprehensive review of the competition and, importantly, give our clubs the ability to ensure they make the key decisions regarding where we take the competition in 2017-18 and beyond. After asking clubs in advance for some initial thoughts on the competition, Tuesday was the next stage of the process and I’m delighted we were able to have such a full and frank exchange of views that will now assist the executive in refining a final proposal that our clubs will now vote on.’