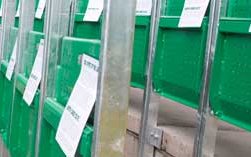 Safe seating campaigners and the Football Supporters’ Federation have launched a survey to see whether crowd funding could see the first safe standing areas introduced to an EFL club.

The FSF and other campaigners have confirmed that they are in advanced discussions with an unnamed club in the Football League pyramid over the introduction of a section of rail seating at their ground.

The club in question currently has an all seater stadium but are open to the possibility of introducing a safe standing area to their ground and should this plan reach fruition, they would be the first club post-Taylor era to revert from all seater to standing accommodation.

As part of this, as there are obviously financial elements at play at making such a change, the FSF and Jon Darch from the Safe Standing Roadshow are asking fans to fill out the – Survey – to gauge the opinion of fans into the viability of crowd funding as a way forward.

‘After the resounding success of safe standing at Celtic, the next big boost for the campaign would be the introduction of standing at an all-seater ground south of the border. It would mark a major milestone on the journey towards enabling all clubs with all-seater grounds to do likewise, if they so wish.’

They are hoping to gauge:

Is this a campaign you’d support, even if it’s not your club?
Would you be willing to make a small donation?
If so, what sort of rewards would you like?

‘It will really help us to tailor this campaign to ensure it’s a huge success.’